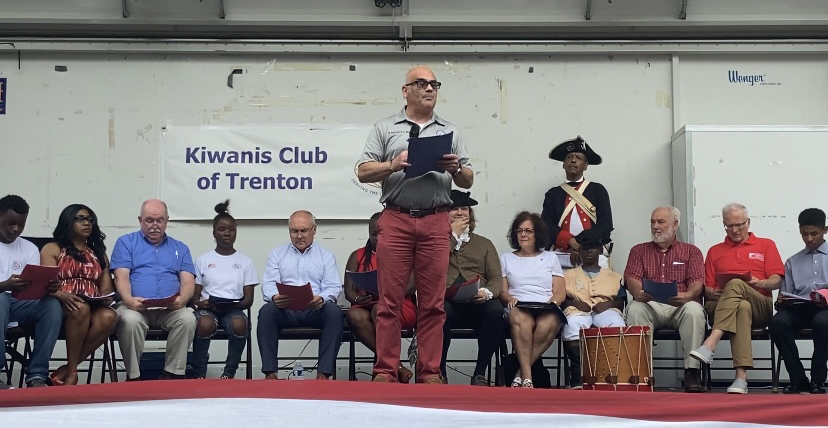 On July 8, 1776, Trenton hosted the first public reading of the Declaration of Independence outside of Philadelphia in front of, what was then, the Hunterdon County Courthouse on Warren Street (Trenton was then part of Hunterdon County). The now-immortal words of the Declaration of Independence were proclaimed aloud, and ultimately heard around the world.

Yesterday, exactly 245 years to the day, Trentonians gathered to re-proclaim those words that birthed our nation.

On Thursday, July 8, 2021, members of the current Trenton community gathered outside the historic site of 23 South Warren Street to host a public reading of the Declaration of Independence. In a joint effort, community leaders of all ages and backgrounds recited the declaration word for word.

To kick off the patriotic event, Patricia Hall, Executive Director of the Trenton Downtown Association (TDA) serenaded the crowd with the classic tune America the Beautiful. To follow was an invocation and an inclusive prayer by Pastor Molly Dykstra of First Presbyterian Church of Trenton.

The recitation of the document commenced afterwards. Readers of the Declaration of Independence included:

To close off the event, Hall serenaded the crowd once again with the tune God Bless America. Attendees joined in and sang along, marking the end of the commemorative event.

After the celebration, attendees and readers mingled by the historic mural on Warren Street by artist Illia Barger (2006) that depicts the first ever public reading on the steps of the court house. Children from the Boys & Girls Clubs of Mercer County posed for photos with Mayor Guciora and various community reenactors.

As the event came to an end, Alex Treece, President of the Kiwanis Club of Trenton (who sponsored the afternoon’s event) stated, “Let’s not wait another 245 years to celebrate.”