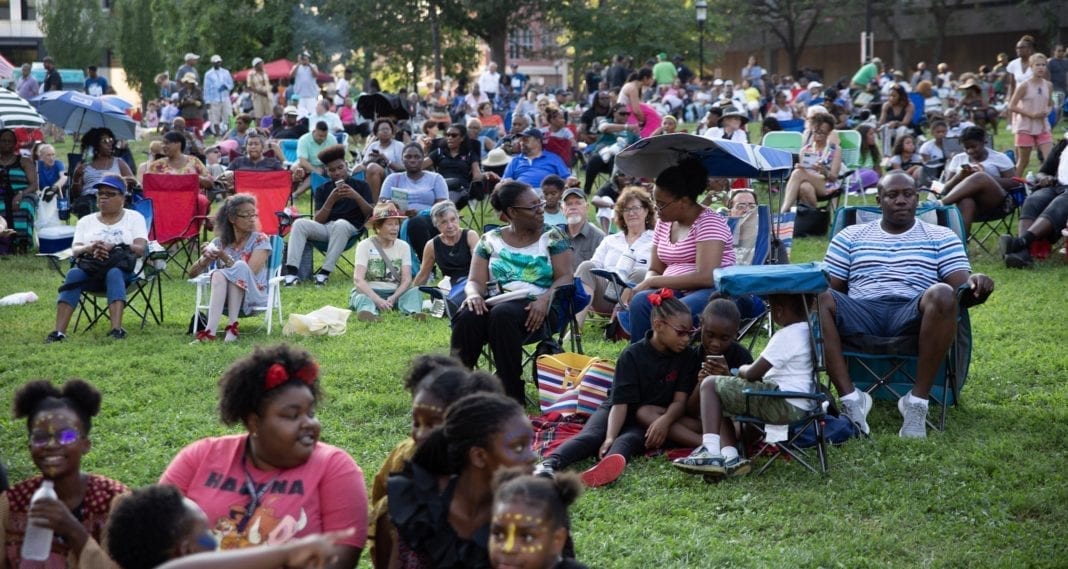 Today, the Mortimer & Mimi Levitt Foundation named the Trenton Downtown Association as one of three nonprofits across the United States to win a new, $75K multi-year matching grant over the next three years to present the Levitt AMP Music Series. The two other nonprofits to win the multi-year matching grant are Middlesboro Main Street in Middlesboro, Ky.; and the John Michael Kohler Arts Center in Sheboygan, Wis. Each of these nonprofits has received annual Levitt AMP grants during the past four consecutive years.

“We are thrilled to announce Trenton as a multi-year Levitt AMP grant award winner,” says Sharon Yazowski, executive director of the Levitt Foundation. “During the past four years, the Trenton Downtown Association has shown tremendous impact in the community through Levitt AMP, bringing people together of all ages and backgrounds through the power of free live music, while creating a meaningful community gathering space in the state capital’s historic downtown core. We’re proud to continue our support of this inspiring community.”

“The TDA is extremely grateful and very excited to have the Levitt Foundation recognize Trenton with this incredible opportunity, says Tom Gilmour, Executive Director. “The Levitt AMP Trenton Music Series has been a platform that has created families of attendees, staff and volunteers from within the community to come together every Thursday evening in the summer. We are thrilled to see this journey unfold with our partners and presenting sponsors from the beginning, the City of Trenton, New Jersey Manufacturers and New Jersey State Council on the Arts. The multi-year grand provides us a new opportunity to leverage our success and continue to host this amazing event in the heart of downtown Trenton for three more years. Thank you to the hundreds of individuals and sponsors who make this happen!”

In June, the Levitt Foundation invited nonprofits to submit proposals that would reflect the three goals of the Levitt AMP awards: Amplify community pride and a town or city’s unique character; enrich lives through the power of free, live Music; and illustrate the importance of vibrant public Places. Nonprofits that received a previous Levitt AMP grant were eligible to reapply. A total of 78 nonprofits from around the country submitted Levitt AMP proposals for 2019, and of these 42 proposals were advanced to the online voting phase, with the public invited to help choose the Top 25 finalists. As a multi-year grant recipient, Trenton will receive funding through 2021 and therefore will not participate in the Levitt AMP online voting process, which opened earlier today at http://levittamp.org and ends at 5:00 pm PST on November 20, 2018. The 2019 Levitt AMP [Your City] Grant Award winners will be announced on December 18, 2018.

The Mortimer & Mimi Levitt Foundation is a private foundation that exists to strengthen the social fabric of America. Through its support of creative placemaking, the Levitt Foundation empowers communities to transform underused public spaces into welcoming destinations where the power of free, live music brings people together and invigorates community life. The Foundation’s primary funding areas include permanent Levitt venues and the Levitt AMP [Your City] Grant Awards, an annual grants competition. During the past decade, the Foundation has awarded more than $20 million in grants to support access to free, high-caliber live music experiences while bringing new life to public spaces.

The Levitt network of permanent outdoor music venues, Levitt AMP concert sites, Levitt National Tour and select outreach concerts collectively serve more than 750,000 people annually through nearly 500 free, family-friendly concerts in 26 towns and cities. As an example of the high-caliber talent presented across the Levitt network, the 2018 GRAMMY nominees included 15 artists who have performed on Levitt stages in recent years.

Up to 15 small to mid-sized towns and cities are awarded $25K Levitt AMP matching grants every year to present 10 free concerts in reimagined public spaces during summer or fall. Levitt AMP grantees range from nonprofit arts organizations to downtown business partnerships to universities to community development organizations and more. To date, more than 25 communities have received Levitt AMP grants since 2015.

Permanent Levitt venues are located in cities as diverse as Los Angeles; Denver; Dayton, Ohio; Westport, Conn.; Bethlehem, Pa.; Memphis, Tenn.; and Arlington, Texas. Each permanent Levitt venue presents 50 free concerts every year and is programmed, managed and supported by its own 501(c)(3) Friends of Levitt nonprofit organization, with Levitt Pavilion Los Angeles run by the Foundation. Due to accelerating interest from cities and engaged citizens, the permanent Levitt venue program is growing. Developing Levitt locations across the country include Sioux Falls (opening 2019) and Houston (opening 2021), amongst other cities. Learn more at http://levitt.org

The Trenton Downtown Association (TDA) is a non-profit organization dedicated to making the capital city a more competitive location for business owners and an engaging center for workers, residents and visitors. Since 1986, TDA has offered programs that promote economic growth and investment in New Jersey’s capital city. Our staff is involved in business recruitment and retention, public relations, advocacy, marketing support, referrals, partnership development and job creation. TDA also hosts events like the Capital City Farmers Market, Levitt AMP Trenton Music Series and Patriots Week to attract visitors to experience the current growth happening in the downtown. TDA also oversees the BSB Gallery located at 143. East State Street. Through maintenance of a clean and safe commercial district, support for the arts and cultural heritage, promotion and public policy planning, The Trenton Downtown Association a leader in the revitalization of the City of Trenton.