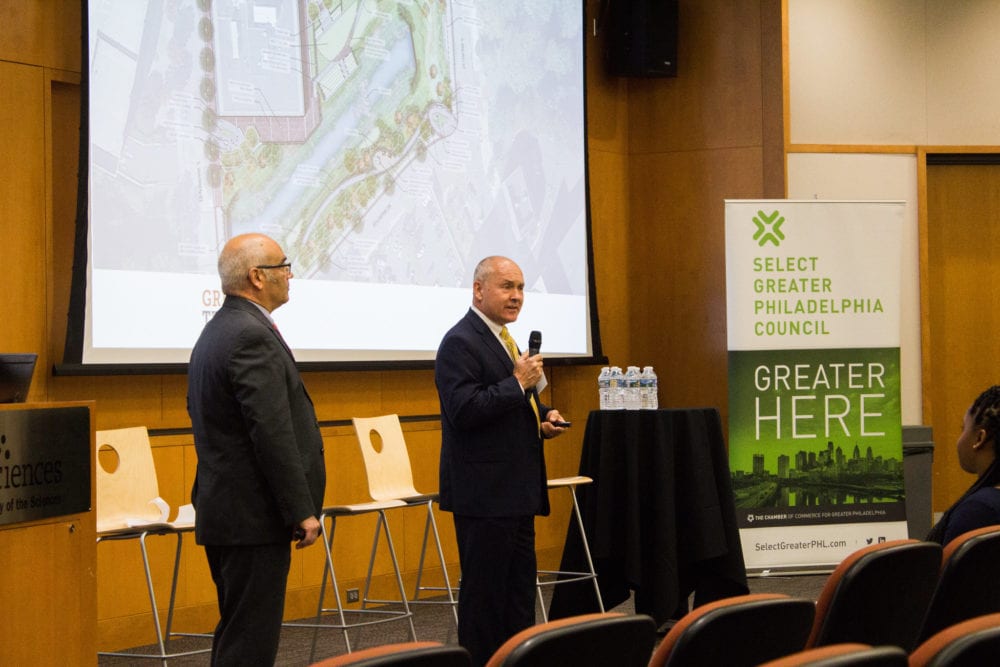 On June 12th, Greater Trenton CEO George Sowa and Trenton Mayor Reed Gusciora presented to a crowd of business leaders at Select Greater Philadelphia’s Breaking Ground program to make the pitch for Trenton and to attract new business development partnerships. The event, which was held at the McNeil Science and Technology Center in Philadelphia, showcased development projects that are revitalizing, transforming, and innovating the future of Greater Philadelphia’s neighborhoods, towns, and cities. Featuring projects and initiatives across 11 Counties in Delaware, New Jersey, and Pennsylvania, the event highlighted how developers are building communities that will flourish well after the ribbons have been cut.

The $8 Million park and creek daylighting project, which is well underway, aims to restore vibrancy and create a significant attraction downtown.

Historical note: On January 2, 1777, during the Second Battle of Trenton of the American Revolutionary War, soldiers of the Continental Army and supporting militias, under the direct command of General George Washington, held a defensive line along the south shore of Assunpink Creek south of Trenton, stretching from the mouth of the creek up to Philip’s Mill. The American soldiers successfully repelled several charges by British and Hessian soldiers across a stone bridge over the creek, and also repelled an attempt to ford the creek near its mouth.

The creek represents an important moment in American history. Now, it will play an increasingly important role in Trenton’s economic development cycle.